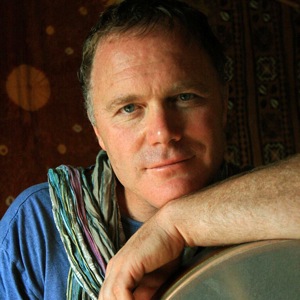 John de Kadt is an internationally acclaimed percussionist, poet, and storyteller. John plays ethnic percussion instruments from across the globe and has a passion for spoken word, whether it’s in poetry, song, rap, or story.  John is also well known for his mellow, instrumental, healing arrangements.  He plays with kirtan artists worldwide and is a founding member of the well-known devotional group The Hanumen. Motivated by a love of the earth, community, and wisdom traditions, John’s poetry and story stirs the heart and awakens us towards a remembrance of ourselves and the wildness of the natural world. His sixth album, Speak, was just released in fall of 2016.

In his early twenties John left college and went searching for others ways of living. He felt that our culture was incredibly out of touch with the some essence of life. He went on a sojourn not knowing exactly for what he was searching, only knowing he wanted to continue to play the drums and to find a community to live in that was more in touch with the earth. That journey led him to a yoga ashram where he lived for five years. The ancient practice of call and response chanting called kirtan became part of his daily routine, as did yoga, drumming and meditation. The sangha or community and this way of living was very rewarding in many ways and changed the direction of John’s life.

John went on to study percussion from around the globe in India, Turkey, Brazil, Africa, Cuba, Columbia and throughout the US. The healing power of the drum inspired him to continue on a richly rewarding quest to discover and support his love of music and spoken word. Combining his own poetry with drumming John released his first CD “This Rhythm Is Not Mine” in 2005. He released his second album “Eight“, an instrumental CD for yoga, in 2008. Sounds True re-released Eight under a new title in 2010 as “Rhythms Of The Infinite“. His third CD “One River” co created with Benjy Wertheimer was released in the summer of 2012. He is also member of the touring kirtan group The Hanumen who released there debut album in 2013 called The Hanumen. It has received rave reviews from numerous magazines and The Hanumen are releasing there second album in 2015.

John appears on numerous recordings and performs regularly throughout the US. He has performed with Glen Velez, Eugene Friesen, Robert Bly, Baba Olatunji, Colman Barks, David Darling, Jai Uttal, and many others. He has performed live nationally on NBC and PBS. John offers concerts and workshops internationally for festivals, retreats, schools, & corporations. He is appreciated for his percussion talent , humor, spoken word and poetic inspirations.